Expectations for Joe Burrow and the Cincinnati Bengals

The Cincinnati Bengals had very rough season, finishing the year at 2-14 and earning the first overall pick.  Under new head coach Zac Taylor, the Bengals had the 30th ranked offense and the 25th ranked defense.  A majority of the teams' offensive struggles came from the horrid offensive line and Taylor still figuring out how to be a head coach.  The Bengals also decided to bench Andy Dalton for rookie quarterback Ryan Finley for three starts which was possibly the worst mistake they made.  The Bengals defense is solid, but had a couple holes that needed to be filled.  The defensive line is solid with Carlos Dunlap and Geno Atkins, but could've been beefed up with another big body interior lineman.  The linebacking corps is young with Nick Vigil and and Preston Brown on the inside and Sam Hubbard and Germaine Pratt on the outside, all of which should see improvement in 2020.  The secondary is split as the Bengals have solid safeties in Jessie Bates III and Shawn Williams, but the cornerbacks were lacking a bit with two of their three starting corners (Denard and Kirkpatrick) missing at least half the season.  Now that the offseason is nearly over, what are the expectations for the Bengals entering the 2020 NFL season?
With the first overall pick in the draft, the Bengals drafted college superstar quarterback Joe Burrow from LSU.  Burrow had just completed the best college football season in history throwing for 5600 yards and 60 touchdowns while leading LSU to a national championship title.  Joe Burrow will clearly be the starter for week one and this move alone will be a serious improvement for this struggling offense.  Andy Dalton is not a bad quarterback, but he doesn't have the explosiveness like Joe Burrow has anymore, so it was time to move on from him.  One of Burrow's favorite weapons in college was the Viking's rookie receiver Justin Jefferson, and that role looks like it will be filled beautifully by Tyler Boyd.  That is assuming the role of Jamar Chase, who is still at LSU, can be filled by AJ Green if he can stay healthy.  Outside of those two receivers, Cincinnati has good depth at the position with guys like John Ross, Alex Erickson, Auden Tate, and now rookie wide receiver Tee Higgins.  Not to mention star running back Joe Mixon who is a solid receiver out of the backfield. 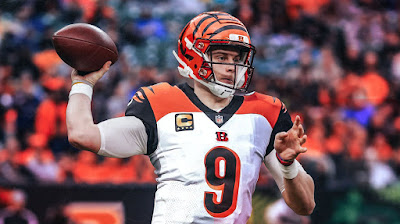 Some other notable additions in Cincinnati include DJ Reader (DT), Trae Waynes and Mackenzie Alexander (CBs), Josh Bynes (LB), and Vonn Bell (S).  They really put an emphasis on the defense this offseason which will hopefully get their offense on the field more.  They will also get second year tackle Jonah Williams back from injury which should instantly make this offensive line better than it was last season.
The future in Cincinnati is finally starting to look bright, but what are the expectations for this coming season?  Rookie quarterbacks can take time to develop sometimes, but Joe Burrow is arguably one of the most complete quarterback prospects to ever be drafted.  He should be at least a top 20 quarterback and win offensive rookie of the year by a large margin.  If the defense steps up, this will give Burrow more time on the field, meaning 4000 yards is not out of question for this rookie.  He could also break Baker Myafield's rookie touchdown record of 27.  It's a lot to ask of Joe Burrow on an offense that struggled mightily last season, but he just may be that good.  The ceiling for this team is still relatively low, on top of them not having a very easy schedule.  Anywhere from four to six wins is realistic, seven being the absolute best.  They shouldn't be in the running for the first pick in the draft, but could potentially have a top five pick.  If Joe Burrow is the real deal and can play even half as well as he did his final year at LSU, the future of Cincinnati is as bright as ever.
- July 09, 2020

Email ThisBlogThis!Share to TwitterShare to FacebookShare to Pinterest
Labels: Predictions