Should the Buffalo Bills move on from Josh Allen?

Josh Allen was drafted by the Buffalo Bills after they traded up for him in 2018.  Allen was a very raw prospect coming out of Wyoming and relied heavily on his legs and cannon of an arm.  He is a project of quarterback that still needs a significant amount of improvement to be considered a true franchise guy.  Entering his third season now, can Josh Allen make the much needed leap or will the Buffalo Bills need to move on from him? 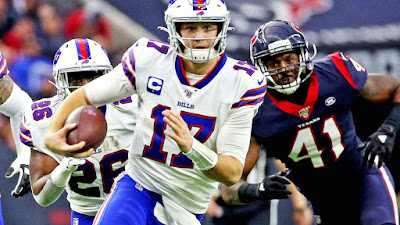 In his three years at Wyoming, Josh Allen passed for just over 5000 yards and rushed for over 750 yards.  Although the numbers aren't very impressive, Wyoming didn't have the greatest team built around Josh Allen and he was the sole reason they were winning any games.  He finished his college career with a poor 56.2% completion percentage to go along with a 2:1 touchdown to interception ratio.  His accuracy hasn't improved much since he's entered the league either.  So far in his career, he's averaged a 56.3% completion percentage to go along with a 1.4:2 touchdown to interception ratio.  According to NBC Sports, the Bills were second in the league in dropped passes with 26 total, which definitely contributed to his low completion percentage.  Not only do drops effect his completion, but pressures and lack of protection contribute as well.  If the dropped passes and passes thrown under pressure are factored out, he still only has a 64.7% completion percentage according to playerprofiler.com.  This ranks 33rd in the NFL in 2019.  Josh Allen also led the league in throwing the most uncatchable passes with a revolting 27% according to Pro Football Focus.  Allen has a long way to go as a passer in this league.
Josh Allen also relies heavily on his legs to make plays.  In 2019, Allen had 109 carries for 510 rushing yards, just under 7.0 yards per carry.  He also led the league in quarterback rush touchdowns with nine.  Over the last two seasons, Josh Allen also has 22 fumbles, losing seven of them.  Allen has a great ability to make plays using his legs, but he isn't the safest while doing so.  There are many plays he should've slid or ran out of bounds instead of taking an unnecessary hit.  For example, when the Bills faced the Patriots in week four of the 2019 season, he took a hard hit from safety Jonathan Jones that knocked him out of the game.  Although the hit was illegal and the Patriots were penalized for it, these types of hits happen all the time, especially for quarterbacks that don't look to slide before contact.  The Bills ended up losing the game 16-10 as back up quarterback Matt Barkley couldn't get the job done.
Yardage totals and passing stats in general aren't very important for Buffalo's success as they use a run heavy offense and rely on their defense to make plays as well.  Efficiency is important though, and Josh Allen is not as efficient as he needs to be to take the Bills past the wild card round at the moment.  With the addition of Stefon Diggs, Josh Allen has one of the best route runners in the NFL and the best receiver he's had yet in his career.  The Bills also drafted running back Zack Moss and two wide receivers in Gabriel Davis and Isaiah Hodges.  Zack Moss will take over the Frank Gore role while the two receivers should look to add much needed depth to a lack luster receiving group.  The Bills also have Dawson Knox at tight end who looked solid last season, but should take another step forward. 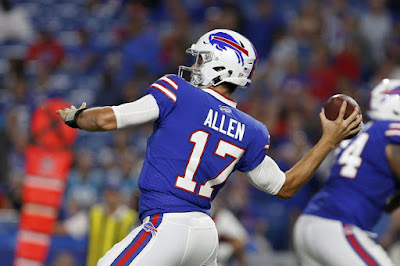 With all these new pieces and returning talents, Allen is entering what should be a "prove it" year.  He did take the Bills to the playoffs in 2019, but lost against the Houston Texans in their first game after blowing a big first half lead.  He was also carried by a top five defense and great coaching throughout the 2019 season.  If Josh Allen can't improve as a passer, it may be time for the Buffalo Bills to begin looking for a new quarterback.  The Bills are projected to have another good season, so they may have too late of a draft pick to get one of the top prospects like Trevor Lawrence or Justin Fields.  They are in win now mode, so free agency is an option as well.  Jameis Winston is the best quarterback to hit free agency in 2021, assuming Dak Prescott gets a deal done with the Cowboys.
The Buffalo Bills do not need a perfect quarterback.  They need someone who can run play action, scramble, and be accurate on intermediate and deep passes.  Allen does two of those three very well, but he is not an accurate quarterback.  With an improved offense and a top five defense, all the pressure falls on Josh Allen to progress as a passer.  If he can't hit a 70% adjusted completion percentage, it may be time for Buffalo to look for a new quarterback.
- July 15, 2020