The Arizona Cardinals are the Real Deal

The Arizona Cardinals have been receiving a lot of attention this offseason after some stellar acquisitions from trades, free agency, and the draft.  They robbed the Houston Texans of Deandre Hopkins, got some much needed defensive line help in Jordan Phillips, added another pass rusher with Devon Kennard, and got two massive steals in the draft in Isaiah Simmons and Josh Jones.  Many experts and analysts in the sports community are saying that Arizona has won the offseason and is one of the most exciting teams to watch.  The sports community is split on the Cardinals however.  Fans seem to be on one of two sides of this trend.  Either the Cardinals will exceed expectations and be a playoff contender, or they are the 2019 Cleveland Browns who had tons of hype but failed to live up to it.  Don't be fooled by anyone discrediting this team.  The hype is real, and there are many reasons why.
Let's begin with the offense.  Kyler Murray is coming off an impressive rookie campaign where he earned the offensive rookie of the year award.  He threw for over 3700 yards and 20 touchdowns on a 64.4% completion percentage.  On top of Murray's passing ability, he also rushed for almost 550 yards and four scores.  Kyler Murray added a much needed spark to this offense that Josh Rosen never had.  He isn't the only reason this offense was so explosive.  Half way through the season, the Cardinals traded for the Dolphins running back Kenyan Drake.  In just eight games, he rushed for 643 yards and eight touchdowns.  With an improved offensive line that was healthy almost all of 2019, both the passing and rushing game should progress. 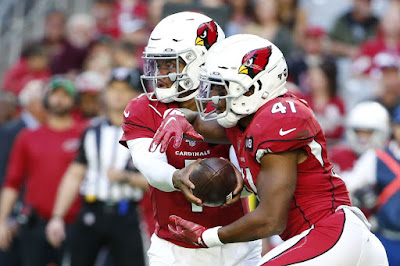 One of the biggest problems Arizona had last season was their red zone efficiency.  According to Pro Football Focus, the Cardinals had the 26th best red zone offense, scoring on just 15.7% of their trips inside the 20.  This problem will be fixed by the addition of Deandre Hopkins, a tall, jump ball, contested catch master.  Hopkins is the perfect red zone threat that the Cardinals were lacking all of last season.  Not to mention Christian Kirk got a good share of the red zone targets as well, he just couldn't turn those targets into points.  Having Kenyan Drake for an entire season in 2020 should take some pressure off Murray to throw so much in the red zone as well.
The offensive line struggled a bit last season, but got exponentially better as the year went on.  The Cardinals allowed 50 sacks in 2019, but nearly half of them game within in the first few weeks of the season.  Kyler Murray has even come out and said most of those were on him not knowing how to scramble properly and letting the offensive line know where he was going to be.  As the season went on, Murray became a better and safer scrambler and the offensive line looked way better.  The unit looked solid for run blocking as both Kenyan Drake and Chase Edmonds averaged over five yards per carry.  In this offseason, they added much needed depth in Josh Jones and recently signed Kelvin Beachum.  The Arizona offense will be difficult to stop next season as long as everyone stays healthy.
The defense was by far the biggest problem with this team.  The Cardinals finished with only 40 sacks and a -1 turnover ratio.  They also allowed 38 touchdowns, 16 of which came from the tight end position.  The defensive line couldn't stop a run as they allowed nearly 125 rushing yards per game.  The pass defense wasn't much better as they allowed just over 280 yards per game.  Arizona had holes all over this defense, but some of these offseason acquisitions may be enough to fix their major problems. Lets first address their pass rush.  Chandler Jones was the only viable pass rusher they had in 2019 as he finished with 19 sacks.  The next highest was Terrell Suggs and 5.5 sacks, and he wasn't even there for most of the season.  In this offseason, the Cardinals added defensive tackle Jordan Phillips who is coming off his best season yet with 9.5 sacks.  Interior pass rush is hard to find in today's NFL and Phillips appears to be a solid option to create that much needed pressure.  The Cardinals also added Devon Kennard who finished 2019 with seven sacks.  Throw in their ability to have Budda Baker, Patrick Peterson, Byron Murphy, Isaiah Simmons, Jordan Hicks, or De'Vondre Campbell blitz as well, the pass rush should be scary next season.  All of these additions should take some attention away from Chandler Jones and possibly allow him to have an even better season.
Stopping the run is another thing this defense was well below average at, allowing over 120 yards per game to opposing running backs.  Much like the increased pass rush, a lot of those pieces should help stop the run, especially Jordan Phillips.  The Cardinals have been lacking such a big body in the middle of their line next to Corey Peters and Rodney Gunter, neither of which are stars at their respective positions.  Isaiah Simmons is the next biggest addition to help stop the run as that is one of the many things he excelled at in college.
Pass coverage is the last piece of the defense the Cardinals need to improve upon.  Their secondary didn't look half bad once Patrick Peterson got back in stride after his six game suspension to begin the year.  Byron Murphy was thrown into the number one corner position as a rookie where he was guaranteed to struggle.  The safety duo of Budda Baker and Jalen Thompson is also very underrated.  The main problem when stopping the pass was with the linebackers.  Every single tight end had a field day against Arizona.  As stated earlier, they let up 16 touchdowns to the tight end position alone.  The signing of De'Vondre Campbell may fix that problem by itself as he's proven himself to be solid at covering tight ends.  Him and Isaiah Simmons will both be thrown into that mix, on top of Jordan Hicks already being there.  If the Cardinals can limit yards and scores given to opposing tight ends even to 75% of what it was last season, their defense will look miles better. 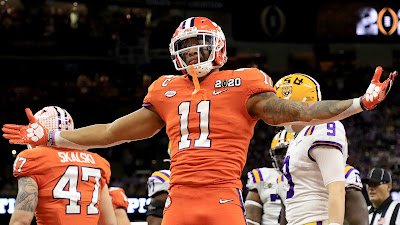 On paper, the Arizona Cardinals appear to have a much better roster than they did in 2019, especially on the defensive side of the ball.  That's what was said about the Cleveland Browns after the 2018 season as well.  The biggest difference in these two teams is the continuity Arizona has in their coaching staff.  The Browns moved on from their head coach between 2018 and 2019, on top of changing their offensive and defensive coordinators regularly.  There are new systems, schemes, and playbooks that each coach and coordinator brings to the team year in and year out making it much more difficult to have young players develop properly.  The Cardinals kept Kliff Kingsbury as their second year head coach, as well as keeping both offensive and defensive coordinators.  Continuity is the one thing Cleveland lacked last season which is why they failed to live up to expectations.  The Cardinals have all the pieces in place and are quietly building a powerful team.  They will be a game plan nightmare in the 2020 NFL season.  Watch out for the future Arizona Cardinals.
- July 22, 2020

Email ThisBlogThis!Share to TwitterShare to FacebookShare to Pinterest
Labels: Teams