Which Quarterbacks will Breakout in the 2020 NFL Season?

Over the last couple seasons, there has been a trend of second year quarterbacks winning the Most Valuable Player award.  Both Patrick Mahomes and Lamar Jackson were in their second season when they won the MVP award.  With the 2020 NFL season just around the corner, there are five promising quarterbacks going into their second season, and another four going into their third season.  The trend of young quarterbacks breaking out in years two and three should continue with so many different options, but which of these quarterbacks have the greatest odds to succeed?
Starting with quarterbacks going into their third seasons, only one of them has accomplished much in their short careers so far.  Lamar Jackson has already won the Most Valuable Player award and has taken the Ravens to the playoffs twice.  Although he has yet to win a playoff game, he is proving doubters wrong by showing his ability to effectively throw the ball on top of being a great rushing quarterback.  He threw for 3127 yards and 36 touchdowns against six interceptions.  Jackson also rushed for another 1206 yards and seven more scores.  There's not much more he can do after breaking the quarterback rushing record until he improves even more as a passer.  Lamar Jackson has already broken out, but definitely has not hit his ceiling yet. 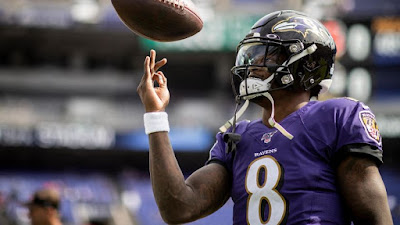 Josh Allen is up next.  Allen has already been solid thus far in his NFL career, but hasn't been anything special.  He can make plays with both his legs and his arm, but he has poor accuracy.  Allen took a step forward in his passing from 53% accuracy to 59%, but he's still dead last in the league.  He doesn't seem to have an extremely high ceiling as Buffalo uses a run heavy scheme, but he could still improve.  Josh Allen probably won't take that massive leap in 2020 and have a breakout season, but he could still progress as a passer.  He's already taken the Bills to the playoffs, the only way to go from there is to take them to a Super Bowl, or at least win a playoff game. 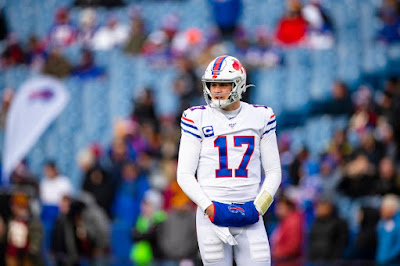 Baker Mayfield is has been the best Browns quarterback of the last two decades.  It doesn't say much, but he has shown flashes here and there.  Cleveland has struggled to fully build around him, but the roster looks solid now with an improved offensive line and the addition of a top ten tight end.  The Browns did change coaches once again, and Kevin Stefanski loves to utilize the running game.  The offense won't be focused on Mayfield, but that doesn't mean he can't breakout.  This is a make or break year for Baker Mayfield, and the pieces are all there for him.  There is a pretty good chance Baker proves himself in 2020 and earns himself an extension in Cleveland. 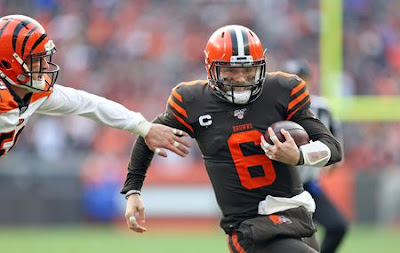 The last starting quarterback from this draft class is Sam Darnold.  Darnold is a talented quarterback, but much like the Browns, the Jets have failed to build around him.  He has Jamison Crowder as his best receiver, a bottom ten offensive line, and Adam Gase ruining the first few years of his career.  New York did draft both a tackle and receiver for Darnold, they also signed multiple offensive linemen in free agency.  Sam Darnold has all the talent he needs to be a successful quarterback in the NFL, but the front office won't build around him.  The chance of Darnold breaking out in 2020 are low, but it's not at any fault of his own.  He's shown loads of potential and even had a winning record (when he started) in 2019 for the New York Jets. 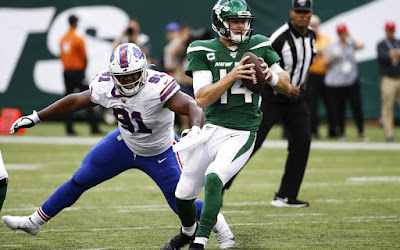 Leading the pack of the second year quarterbacks is the reigning offensive rookie of the year, Kyler Murray.  Murray had a fantastic rookie season throwing for over 3700 yards and 20 touchdowns, along with rushing for over 500 yards and four more scores.  Kyler has the best chances to breakout in 2020 as the talent is already there.  Kyler Murray has amazing accuracy and very underrated quickness.  The Cardinals also built around him this offseason.  Arizona made a blockbuster trade in which they acquired Deandre Hopkins, they transition tagged Kenyan Drake, signed Kelvin Beachum, and drafted tackle Josh Jones.  They also have a lot of young talent behind Hopkins with Christian Kirk, Andy Isabella, Hakeem Butler, and Keesean Johnson.  Not to mention they still have Larry Fitzgerald.  Arizona has done a great job building around Kyler Murray in just two seasons, and he is arguably the most likely quarterback to have a true breakout season. 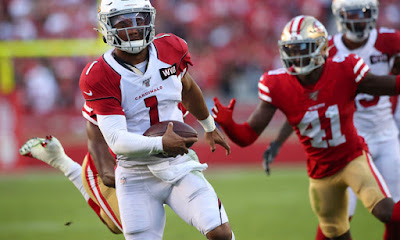 Drew Lock of the Broncos didn't see the field much in 2019, only starting the last five games of the season.  In those five games, he threw for just over 1000 yards and seven touchdowns against three interceptions.  Lock really didn't look great in those games, but it's such a small sample size to judge his play on.  2020 is virtually his first season, but it probably won't be as much of a breakout as people are expecting.  Denver has a solid offensive line on top of a few good weapons for Lock to grow with.  Noah Fant, Courtland Sutton, Jerry Jeudy, and KJ Hamler are all very young and should allow Drew Lock to air the ball out.  If Lock struggles, they also signed Melvin Gordon to pair with star running back Philip Lindsay to take the pressure away from him.  Drew Lock will still have growing pains in 2020, but could turn things around later in the season. 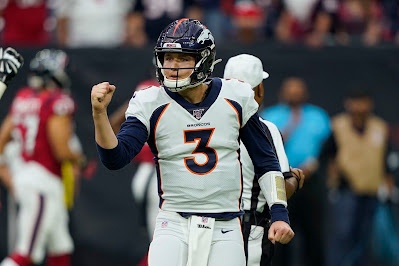 The other quarterback in New York, Daniel Jones, is in a good position to have a breakout season.  In 2019, Jones threw for just over 3000 yards and 24 touchdowns in just 12 starts.  He looked solid in nearly every part of his game, but he had a massive fumbling problem, dropping the ball a miserable 18 times.  If Jones can drop that number significantly, he should look to have a solid 2020 season.  He has three good receiver around him in Sterling Shepard, Golden Tate, and Darius Slayton.  They also have superstar running back Saquon Barkley, and solid tight end Evan Engram.  The offensive line is below average, but Jones can navigate a collapsing pocket pretty well.  The Giants defense is also well below average which means they may have to throw the ball more to stay in games and lead comebacks.  Daniel Jones has some pretty good pieces around him, but the offensive line may slow him down slightly.  He should see a big jump in production and efficiency in 2020. 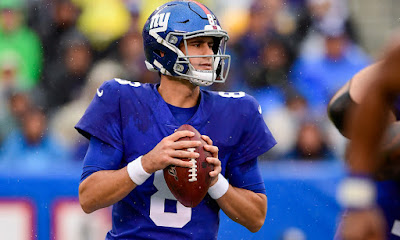 Gardner Minshew will have a tough time in Jacksonville in the 2020 NFL season.  He showed tons of promise in the 2019 season, but the rest of the team really didn't look up to par.  On the offensive side of the ball, DJ Chark and Leonard Fournette both had great seasons, but the offensive line and really any other weapon did not perform.  The defense performed poorly as well, which allowed Minshew to throw even more.  His pocket awareness is phenomenal, his throw on the run is great, and he's got solid accuracy.  If the Jaguars can build around him with good weapons and at least an average offensive line, Minshew could become a good quarterback in the NFL.  The chances he breaks out in 2020 are pretty low as they didn't do much for the offense, but the defense should be slightly improved.  As long as Jacksonville sticks with Minshew and doesn't draft a quarterback in the 2021 draft, he will be a good quarterback in a couple seasons. 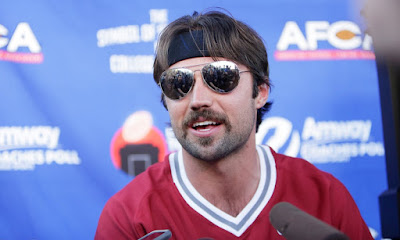 The last second year quarterback is Dwayne Haskins on the unnamed Washington team.  Haskins has been thrown into a bad situation with little talent around him.  The offensive line is average at best, there are no receivers outside of Terry McLaurin and arguably Steven Sims, the tight ends are nonexistent, and the running backs are inconsistent.  On top of all of the recent drama in Washington, Haskins also has to learn under a new coach, although Ron Rivera is an upgrade over Jay Gruden.  In seven starts in 2019, Haskins threw for nearly 1400 yards and seven touchdowns against seven interceptions.  He didn't look great, but it wasn't expected with the lack of talent.  Haskins showed some flashes last season, but ultimately struggled in the Washington offense.  He has a very small chance to breakout, but could slowly develop into a quality starting quarterback in a few seasons as long as Washington can successfully build around him. 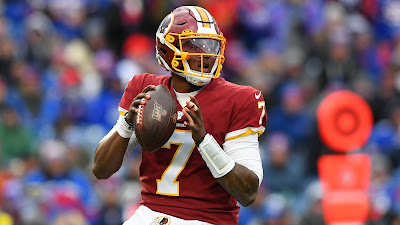 There are tons of young and talented quarterbacks currently in the NFL.  Not every player will succeed in the league though, meaning not every quarterback on this list will breakout.  The most likely ones to take that step forward next season have to be either Kyler Murray, Drew Lock, or Baker Mayfield.  Not only are these quarterbacks arguably the most talented, they also have the best supporting casts and continuity with successful coaches.  Kyler Murray seems to be in the best position to take the next step, and he is also the most favored.  He has an incredible receiving corps, an improved offensive line, and up and coming running back in Kenyan Drake.  The 2020 NFL season will determine how the future of some of these quarterbacks plays out.
- July 29, 2020