Every season there are tons of players that are on the brink of a potential break out year.  All the pieces seem to fall into place for these players and it's up to them to perform.  There's a good number of those players this year, but not every single one of them is going to live up to expectation.  Some will be amazing perform even better than originally thought, others will bust and disappoint whoever drafts them at their ADP.  I will be trying to predict how some of those players will do in this 2020 fantasy football season (based on current ADP).

The Steelers offense struggled mightily in 2019 after Ben Roethlisberger went down with his elbow injury.  Nothing about this offense looked good, but some things were brighter than others.  The run game struggled with James Conner being in and out of games and quarterback play was well below average with a mix of Devlin Hodges and Mason Rudolph.  Even most of the wideouts struggled to beat their man or get open, but Diontae Johnson looked great.  He finished the season with 680 yards and five touchdowns on 92 targets (59 receptions).  Johnson finished the season with a true catch rate of 88.1% which places him 16th overall in 2019.

Diontae Johnson is currently the second wideout on this team, but has the potential to take over as the true one.  Juju Smith-Schuster struggled to beat any coverage last season, but especially man coverage on the outside.  He also missed a few games due to injury and played hurt for some others.  The Steelers could move Juju to the slot allowing Johnson to take over as the real number one receiver on the outside.  Diontae Johnson proved himself to be a great separator last season, averaging about 2.4 yards of separation from the closest man to him.  His separation ability, on top of the fact that he only had three drops last season, shows that Johnson could be a great deep threat for Big Ben when he returns.  This not only helps open stuff up beneath for Juju and tight ends, but it also allows for big plays and long touchdowns for Diontae Johnson.  He was also only on the field for about 66% of snaps which will definitely increase in his second season.

He should have a great season in 2020 mainly due to the fact that Big Ben is back.  Ben will give him way more catchable targets than he had last season (67 of 92 total targets) and with his separation ability, those will be very valuable targets.  Johnson could easily break the 1000 yard mark in just his second season, but the touchdowns probably won't go up that much with the Eric Ebron signing. 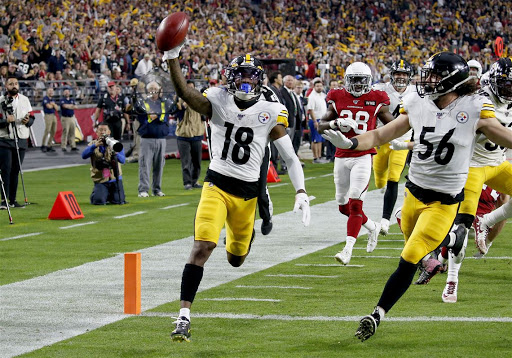 The Buffalo Bills rely heavily on their defense to win them games but also utilize the run game.  Between Josh Allen and the running backs, they average 29.1 attempts per game placing them 6th in the league in 2019.  Of those 29.1 carries, Devin Singletary only averaged 12.6 carries per game.  Singletary also had 20 red zone touches with only one of those coming on the goal line.  He finished the 2019 season with only 775 rush yards (5.1 YPC) and 194 receiving yards with four total touchdowns.  Singletary was on the field nearly 70% of the time, but didn't see the work load to match that much time on the field.

Buffalo drafted Zack Moss in the third round of the 2020 NFL draft.  Moss and Josh Allen will get most of, if not all the goal line carries this season.  Singletary already didn't see the volume needed to be a top tier running back, and now his red zone and goal line carries will be even more limited.  He is an elusive back and has the talent to perform, and that's why I believe a lot of people are drafting him so early.  Talent doesn't produce without the opportunity though.  Unless Singletary gets nearly another 100 carries, he won't be that top tier running back people want.

I am not saying to not draft Singletary.  If he falls another round or two somehow, then take him.  His ADP is too early for the volume he will receive and he will be a disappoint taken at the back of the third round.  He gets little to no goal line work, limited red zone carries, and he's not utilized much in the pass game.  Devin Singletary will be a bust at his current ADP. 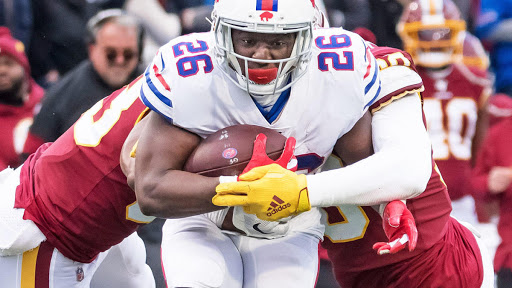 The Lions have struggled to give Matthew Stafford a half way decent supporting cast and defense since they drafted him.  However, Stafford is a very solid fantasy option and is going to be a steal at his current ADP.  Before he got hurt in 2019, Stafford was playing out of his mind.  Through eight games, he threw for 312.4 yards per game, 19 touchdowns, and only five interceptions.  Stafford was throwing touchdowns at an unbelievably high 6.5% touchdown rate.  The offense was firing on all cylinders and Matthew Stafford looked amazing.  Last season was the first time he missed a game since 2010.  Although coming off an injury, he has proven he will be on the field as much as he possibly can.  He's played through smaller injuries before and had success when it comes to fantasy, like 2018 for example.

Coming into 2020, Stafford has two solid receivers in Kenny Golladay and Marvin Jones Jr.  Golladay managed to finish as the sixth best wide receiver in fantasy with garbage at the quarterback position between David Blough and Jeff Driskol.  Marvin Jones Jr. didn't have the greatest finish at number 27, but he is always a threat for 10 touchdowns in a season.  The Lions also finally look to be adding to their run game after taking Kerryon Johnson in 2018 and D'Andre Swift in 2020.  These running backs should not only help open up the run game, but give Stafford more targets to pass to.  Injuries in football are inevitable, but this offense can do some real damage as long as the main weapons stay healthy.

Matthew Stafford is one of the most talented and underrated quarterbacks in the entire NFL.  Stafford finally has an above average supporting cast to help him.  The defense is still lack luster so Detroit will be trailing in some games, so Stafford will be forced to throw more.  As the 15th quarterback off the board, he should easily outperform his ADP and could have multiple weeks inside the top five even. 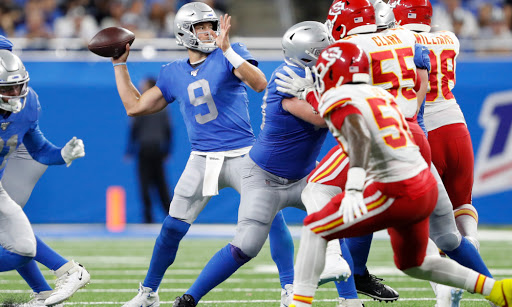 The 49ers ran the ball the second most in the NFL, only behind the Baltimore Ravens.  They have a solid running back committee and only lean on the passing game when they have to.  When Jimmy Garoppolo is throwing, George Kittle is the number one option for him, Deebo is probably the number two.  In 2019, he finished as the wide receiver 29 which is pretty good for a rookie receiver in a run heavy offense.  Samuel is currently dealing with an injury and may not be ready for the start of the season.  He suffered a Jones fracture in his left foot which means even when he's back and playing, he may not be the same for another few weeks.  As the 22nd receiver off the board, he is being drafted as a low end WR2 which is where he should be if he was healthy.

While being on the field for over 72% of the 49ers offensive snaps, he only saw 81 targets and caught 57 of those passes for 803 yards and six touchdowns.  This was also without Emmanuel Sanders for half the season.  The 49ers don't pass the ball a lot because they don't have to.  Samuel probably won't be ready by week one which makes is ADP way too early.  When he's back and fully healthy he will succeed and be worth a much later pick but as long as he's dealing with that injury, Samuel will be a total bust at that ADP. 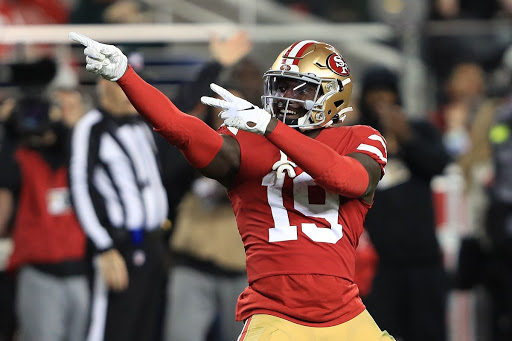 The Los Angeles Rams have a subpar backfield filled with guys like Malcolm Brown and Darrell Henderson after they let go of Todd Gurley.  The Rams took Cam Akers in the second round of the 2020 NFL draft to potentially take over the hole that Gurley left.  They may use a committee to start the season, but Cam Akers is more than talented enough to take over the three down back role relatively early in the season.  He is currently being drafted as the 33rd running back off the board, but could very easily outperform his ADP when he's named the starter in this offense.

The Rams offense struggled in 2019 as the offensive line was not nearly the same as it has been in the last couple seasons.  With how bad they played, the line can really only get better than where it was just a year ago.  Cam Akers will have to earn the starting role, but that shouldn't be too difficult.  He was a high draft capital pick and only has to outperform two back up tier running backs.  Even if he doesn't start week one, Akers in the seventh round will easily outperform his ADP by the end of the season. 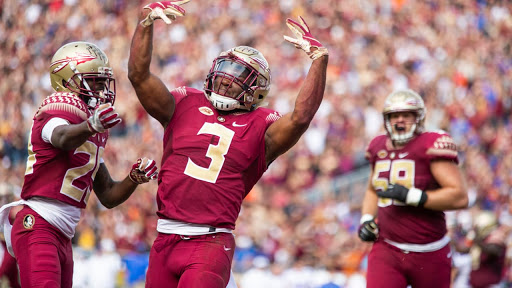 The Titans, much like the 49ers and Ravens, have a very run heavy offense.  Tannehill absolutely thrives in this run heavy, play action passing offense and will continue to perform well.  The reason he will bust isn't because he won't play well.  The Titans had an unbelievably efficient offense in the red zone, only kicking one field goal inside the 20 since Ryan Tannehill took over.  A lot of that has to do with Derrick Henry having an unstoppable season, but Tannehill played his role insanely well too.  This efficiency is impossible to repeat and Tannehill is guaranteed to take a step back.

In 2019, Tannehill started 10 games for the Titans, throwing for over 2700 yards and 22 touchdowns at an incredibly high 7.7% rate.  He also had 10 interceptable passes, but only six interceptions.  The move from Miami to Tennessee is exactly what Tannehill needed to turn his career around, but this explosiveness and high efficiency has to come down.  He performed at a historic level and it's nearly impossible to repeat that success.

His ADP already isn't super high so it won't hurt to take a late round flyer on him.  Whatever you do though, do not reach for him.  If anything, wait to see if he goes undrafted in your league.  In a good match up, he could be a weekly streamer, but he likely will not be a consistent starter for your fantasy team this season. 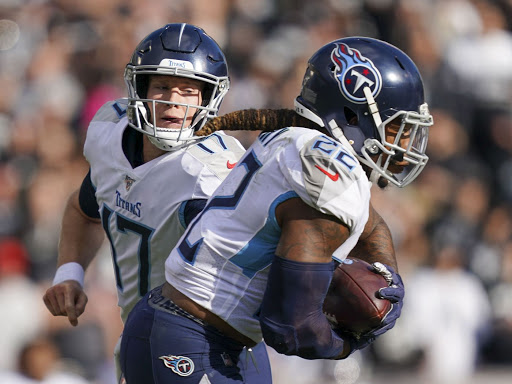