Tight ends are the most difficult players to predict in fantasy football.  There's obviously the top few tight ends like Travis Kelce, George Kittle, Zack Ertz, and Mark Andrews.  These are players everyone knows will produce week in and week out barring injuries.  The next tier of tight ends is usually solid, but have some question marks heading into the 2020 season.  Whether it's touchdown regression, injury concern, or new teammates that could take targets from them, this tier of tight end isn't normally the best every week.  Darren Waller, Evan Engram, Hunter Henry, and Jared Cook are the biggest names in this tier and they each have their own problems, but that doesn't mean they can't be started most weeks.  Every few seasons however, some tight end breaks out and becomes a weekly starter seemingly out of nowhere.  The most recent tight end to do so was George Kittle back in 2018, and now he's a top two tight end in the league.  Tight ends normally take a season or two to really start to produce, so which young tight ends have the best chance to break out in 2020?

One of the most likely candidates is the Dallas Cowboys new TE1, Blake Jarwin.  In 2019, he was the second string tight end behind veteran Jason Witten.  Jarwin finished as the 28th overall tight end averaging 4.4 points per game.  Now with Witten (and Randall Cobb) gone, over 150 targets are vacated in this offense.  The Cowboys did spend a first round pick on wideout Ceedee Lamb, but there is a 0% chance Lamb gets all of those targets.  Jarwin is almost guaranteed to receive all of Witten's workload, if not a little more.

Dallas also fired head coach Jason Garrett who loved to utilize the running back.  The Cowboys then went on to hire Mike McCarthy who likes to pass the ball, and even helped Aaron Rodgers win an MVP award.  With a pass happy coach and a quarterback looking to prove himself once again, Blake Jarwin should see a lot of high quality targets and a decent amount of red zone targets as well.  As the third or fourth option on this team, Blake Jarwin could see anywhere from 70 to 90 targets and (let's say he keeps the same catch percentage) should catch about 60 of those passes.  At his average of over 11 yards per catch, this should put him just under 700 yards on the season.  While Blake Jarwin only had three touchdowns last season, Cobb and Witten had a combined seven scores, so at least a couple of those will fall into Jarwin's hands.  700 yards and five touchdowns would put Jarwin in the top ten tight ends last season.  This may not make him a weekly starter, but he could definitely be streamed in a good match up! 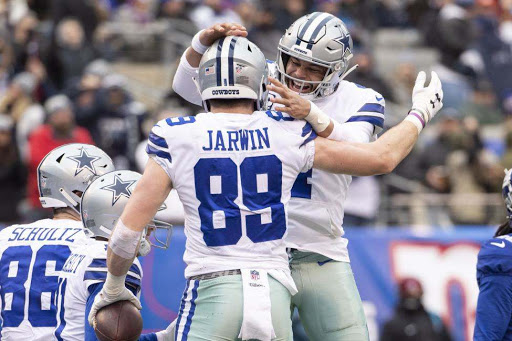 Next up is a tight end in a run heavy offense, but they don't have a great target outside of their number one receiver.  In 2019, Jonnu Smith had 35 receptions on 44 targets for over 400 yards and three touchdowns.  This offense should look to be passing a little more this season as Ryan Tannehill has proven to be efficient in this offense (117.5 passer rating).  The Titans also extended Tannehill for the next four years, really demonstrating their trust in him to run this offense.  This offense still runs through Derrick Henry (who also got extended), but wear and tear will come eventually and teams will start to figure out how to stop him.  Ryan Tannehill excels in this run heavy, play action offense and will continue to thrive, but they don't have many weapons after second year receiver A.J. Brown.

This is where Jonnu Smith comes in.  Tight ends fit perfectly in run heavy and play action offenses as they act as a big target to get the ball out quick to if the first read isn't open.  Last season, Smith had the fourth most targets on this team behind Brown, Corey Davis, and Adam Humphries.  Corey Davis has proven he is at best a third option and a waste of a first round in pick.  Adam Humphries not only dealt with injuries last season, but also had about 70 less yards on more targets and receptions.  The Titans need a more consistent target who can be used in the short passing game, but can also get YAC.  A.J. Brown is used to stretch the field and will more than likely never see more than 80 receptions in this offense.  With such a poor receiving corps, Jonnu Smith has a great opportunity to step up in this offense and could easily see a greater target share, especially now that Delanie Walker will not be returning either.  The departure of Walker opens up 31 targets and Corey Davis will probably lose some volume as well, vacating another 10 to 15 targets.  These vacated targets will be distributed mainly between A.J. Brown and Jonnu Smith as the top two targets on this team.  Assuming Smith maintains his 80% catch rate, he should see about 51 receptions.  Keeping his 12.5 YPC equates to over 630 yards, but his touchdowns could remain around the same as this offense is bound to take a step back as it was unbelievably efficient in the red zone.  If Jonnu Smith can get 630 yards and four touchdowns, he would finish at the back end of the TE1s.  Again, not the most desirable finish, but it's another potential weekly starter. 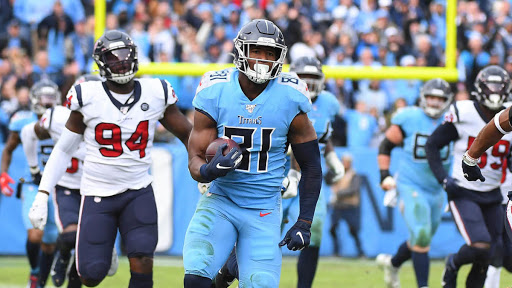 In a slightly more crowded offense, this tight end could see a slight drop in volume but has great big play ability that he proved in just his rookie season.  Noah Fant is a very interesting tight end heading into the 2020 season.  The Broncos clearly want to get the most out of Drew Lock as they drafted two more wide receiver and signed running back Melvin Gordon.  There are a lot of mouths to feed in this offense, but there should be more than enough targets to go around.  Fant was frustrating to own in 2019, even though he did finish as the 16th best tight end.  He finished the year with only three touchdowns and 562 yards on 40 receptions.  The frustrating part of these stats are that nearly 230 of those 562 yards came in just two games.  He also scored two of his three touchdowns in those games.

Noah Fant will not be someone you will want to start weekly.  He is a tight end with big play ability and will have either amazing weeks or could entirely disappear.  Drew Lock only targeted Fant 2.8 times per game (0.6 red zone targets per game) once he took over.  This is a little worrisome, but could very easily change this season.  With so many new weapons, defenses can't focus on just one or two receivers and Fant will be schemed to get open.  He is a big target with safe hands for Lock to pass to under pressure or down the field for a big play.  Drew Lock was on pace to throw the ball 500 times in 2019, which is about 31 attempts per game.  With so many weapons in this offense, the ball will be spread out a lot but in a good match up, Fant could see upwards of seven to nine of those targets.  The Broncos don't have the most favorable tight end schedule, but they do face the Raiders (twice), the Falcons, and the Panthers.  Fant will not be a weekly starter, but he has a high ceiling for the 2020 season.  If Fant only has those two addition big games, that's another nearly 200 yards and two more touchdowns.  If he finished the season with 750 yards and five touchdowns, that's a top ten tight end on the season.  The consistency is the biggest problem with Noah Fant, but he may be worth taking late for those big weeks. 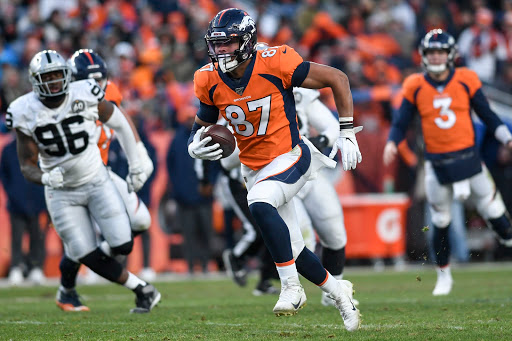 This last tight end is in an awful offense with very limited weapons.  He has the raw, physical athleticism to be a star tight end in this league, but the coaching and offense may hold him back from reaching his true potential.  Chris Herndon on the New York Jets is a real sleeper for this season.  Plagued by injury and suspension in 2019, Herndon only started one game, had one reception on two targets for seven yards.  He flashed in 2018 however with 502 yards with 39 receptions on 56 targets and four touchdowns.  With constant injuries to this receiving corps and the number one guy being Jamison Crowder or Breshaud Perriman, the Jets really need someone to stand out in this offense.  Last season, Ryan Griffen took over as the TE1 and saw 41 targets, but also had five touchdowns.  The Jets also had Robby Anderson last season take some targets.

Sam Darnold has another year in the NFL under his belt and will continue to develop, but the offensive line will still be well below average in 2020.  They added some pieces through free agency and the draft, but the impact these linemen will have is still in question.  This means that Darnold will have to get the ball out quickly (again) leaving the primary two targets as a slot receiver or a tight end.  Chris Herndon will take over the starting role and receive most of Ryan Griffen's targets and some of the 96 vacated targets from Robby Anderson.  Herndon is another tight end who probably won't be a weekly start, but has the potential to be started in a good match up.  The Jets face the entire NFC West next season and they all struggled with covering tight ends; the Rams were probably the best.  They also face the Browns with some injuries in the secondary and Mack Wilson, as well as the Raiders and Dolphins who could still be weak on the defensive side of the ball.  Herndon can be started in a pinch, but will probably need a touchdown to finish as a TE1 on the week. 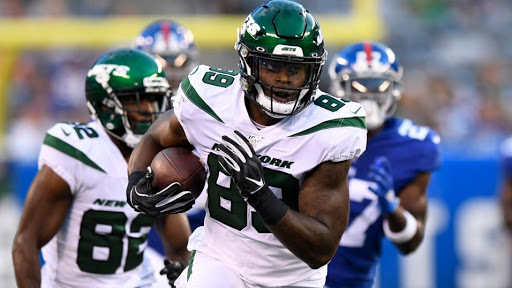