Every season is unpredictable.  There are always breakout players who surprise everyone and disappointing players who ruin people's seasons.  No matter the scenario, saying it before the season almost sounds stupid.  No one believed Chris Godwin would finish as high as he did, Terry McLaurin went undrafted in tons of leagues, and Todd Gurley was an utter disappointment yet drafted relatively high.  Here are some of the bold predictions that could realistically happen in 2020:
D.J. Moore will finish as a top five fantasy receiver
The Carolina Panthers are in a rebuilding year, but they have a few pieces that will give them some success.  One of those pieces is third year wideout D.J. Moore.  He broke out in the 2019 season with 1,175 yards and four touchdowns, finishing as the WR18.  Moore did all of this with absolutely terrible quarterback play between an injured Cam Newton and Kyle Allen.  Heading into the 2020 season, the Panthers are continuing their rebuild and signed quarterback Teddy Bridgewater in addition to new head coach Matt Rhule and offensive coordinator Joe Brady.  Both Rhule and Brady are fresh from college teams and will probably run a similar type offense, given their personnel as well.
D.J. Moore ran a lot of slant routes in 2019 which will work to the strengths of quarterback Teddy Bridgewater.  This may have been because Kyle Allen was incapable of throwing deep accurately, but it also seems to have helped Moore find success.  Although Bridegwater doesn't throw deep often, he is one of the most accurate deep ball passers in the league.  This should not only allow Moore to run some deeper routes, but open up some room underneath for him with other deep threats in Robby Anderson and Curtis Samuel.
The offense will continue to run through Christian McCaffrey, but the passing game will look for Moore as their primary target.  He had 135 low quality targets from Kyle Allen, and only caught 87 of those.  If Moore gets the same volume but the targets are significantly better, he could easily be a 100 catch receiver and break that 1200 yard mark.  The red zone work is where the volume needs to come from.  Moore only had 12 red zone targets in 2019 as McCaffrey was the primary option inside the 20 yard line.  With a viable quarterback in Bridgewater, this volume will go up and so will D.J. Moore's touchdowns.  Moore has a high ceiling in this offense and Bridgewater is the perfect quarterback to play to his strengths. 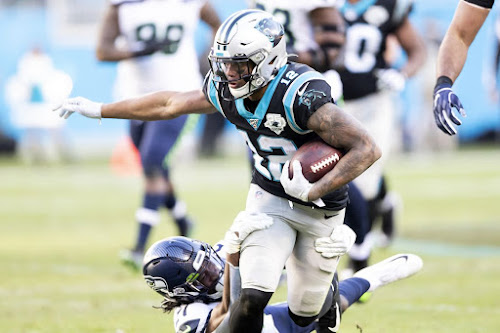 Aaron Jones will finish outside the top 12 running backs
The Green Bay Packers had a great offense in 2019 that was centered around running back Aaron Jones.  They utilized him in both the running game and passing game and he finished the season with over 1500 total yards and 19 touchdowns.  This made Jones finish as the second best running back in fantasy football last season.  These numbers will come down in 2020 and here's why.
The Packers spent a second round pick on A.J. Dillon.  I do not expect Dillon to get many carries between the 20s but he will be used in the red zone, especially on the goal line.  Jones scored a nearly unrepeatable 19 touchdowns in this offense on 34 red zone attempts and 12 more red zone targets.  Aaron Jones led in the NFL in red zone attempts through week 10.  These carries will come down with A.J. Dillon getting the load closer to the end zone.  Aaron Jones losing these carries alone will drop him from 19 touchdowns down to barely double digits.
The loss of touchdowns isn't the only reason Aaron Jones will finish outside the top 12.  The yardage will also come down in this offense.  Although the Packers didn't draft a wide receiver in this past draft, they will be looking to pass more to the wideouts more.  Rodgers seems to trust Allen Lazard as he went to him on a lot of difficult passes in 2019.  Between Davante Adams, Allen Lazard, and the Packers trying to incorporate Jace Sternberger more, the opportunities for Aaron Jones will drop significantly.  Aaron Jones will still be draftable, but he will finish as an RB2. 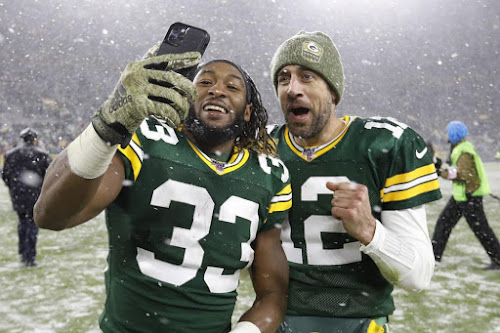 Matt Ryan will finish as a top five quarterback
The Atlanta Falcons have one of the best offenses in the NFL, specifically when it comes to the receiving game.  Julio Jones, Calvin Ridley, Hayden Hurst, and Todd Gurley will all make for great weapons for Matt Ryan in 2020.  Not only is it a trend for Matt Ryan to be in and out of the top ten every other year, there are many reasons that support a bounce back season for him once again.
Julio Jones is nearly a lock for 1400 yards every season and somebody has to supply those yards.  Where Julio lacks in touchdowns, Calvin Ridley will pick up the slack as he has 17 touchdowns over the last two seasons.  Hayden Hurst will also pick up right where Austin Hooper left off, who also had six touchdowns last season.  The Falcons offensive line is still below average, but Todd Gurley is a great receiving back that the Rams failed to utilize last season.  As long as Gurley's knee can stay healthy, he could easily produce 400+ yards through the air and a few touchdowns.  Not to mention another year of Russel Gage in this offense and the acquisition of former first round pick Laquon Treadwell.
Atlanta's defense is also a bottom ten unit in the NFL.  They will let up a lot of yards and points.  This will put the Falcon's in a pass heavy game plan to either catch up or keep up with the opposing offense.  Matt Ryan will have a great season and will use each and every weapon to their absolute ceiling.  This Falcons offense will be tough to stop. 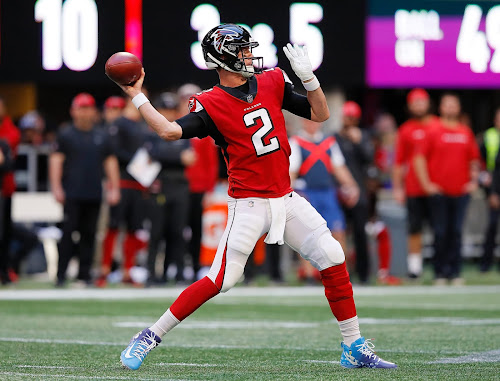 Neither Travis Kelce or George Kittle finish as the TE1
Both George Kittle and Travis Kelce finished with the same PPG, but Kelce finished as the best overall tight end as Kittle missed a couple of games.  These two tight ends are the undisputed best tight ends in the game, but the 2020 season will see a new player emerge and take over that title.  There are really only two other tight ends that could do it, so which one will it be?
Mark Andrews has an incredibly high ceiling.  In 2019, he finished as the fifth best tight end in fantasy football on very limited volume.  Andrews was only on the field 41% of the time, sharing time with Hayden Hurst.  When he was on the field, he finished fifth in targets at the tight end position but 35th in snaps.  With Hurst gone, Mark Andrew's snap percentage will inevitably go up.  Lamar Jackson and the Ravens will be looking to pass a little more with a healthy Marquise Brown.  This means that Andrew's targets will go up as well and he will probably get most, if not all of Hayden Hursts targets as well.  Andrews is a very talented tight end and is Lamar's favorite target.  The volume and play time will increase in 2020 making it a perfect opportunity to nab that number one spot from Travis Kelce.
The next potential number one tight end is Zack Ertz.  He is less likely to do it, but has the chance in PPR formats.  Starting with the obvious, Philadelphia's wide receivers are all made of glass and will get injured at some point this season.  DeSean Jackson is only good for a few games, Alshon Jeffery is already expected to miss the first few weeks, Jalen Reagor just got injured in practice, and even Dallas Goedert suffered a hairline fracture in his thumb.  As long as Carson Wentz stays healthy, Ertz will continue to be the number one option in that offense and will see the required volume to be the number one tight end.  The touchdowns need to increase and he'll need to hit 1000 yards, but both of those are likely with all of the current injury concerns. 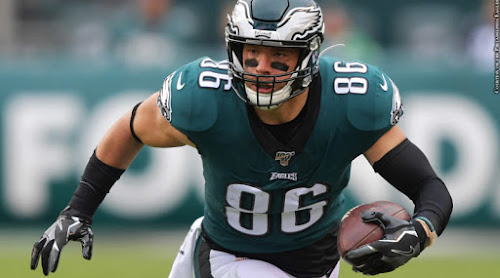 The Los Angeles Chargers will finish with the number one defense
This isn't extremely bold, but a lot of people lean towards the Steelers, 49ers, Ravens, or even the Bills to be the best defense next season.  The Chargers have everything they need on the defensive side of the ball to be the best fantasy defense, even after the loss of Derwin James.
They have arguably the best secondary with Casey Hayward, Chris Harris Jr., Desmond King, and Nasir Adderley.  The three corners can all lock down a receiver with Adderley over the top to help if needed.  The linebacker corps is the worst part about this defense and even that's solid.  They have Kyzer White, Drue Tranquill, and rookie Kenneth Murray.  Tranquill is average at best, but Kenneth Murray looks very promising coming out of Oklahoma.
The strength of this defense will come from the defensive line however, making the secondary look even better.  Possibly the best defensive end duo in the league, Joey Bosa and Melvin Ingram will get pressure on nearly every down and create matchup problems for most offensive linemen.  The interior of this line is anchored by Linval Joseph, but they also have Justin Jones and second year tackle Jerry Tillery.  All of these guys are good run stuffers but can also bring some pass rush alongside Bosa and Ingram.  Sacks and turnovers are the strength of fantasy defenses and this unit will get a lot sacks.  This should lead to a few forced fumbles and force some bad throws to lead to interceptions.  This defense will be elite in 2020 and has all the talent they need to finish as the number one defense. 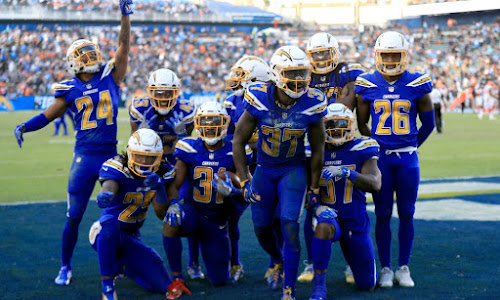 Other predictions that just missed the cut:
Jonnu Smith and Noah Fant both finish as a top 12 tight end
Juju Smith-Schuster fails to finish as a top 20 wide receiver
Terry McLaurin finishes as a top 10 wide receiver
Garnder Minshew will have three top five weeks
Le'Veon Bell struggles in New York again and finishes as a mid tier RB2
Joe Mixon has four weeks as the best running back, finishes top five
Patriots lost too much on defense, finish outside the top 10
No Dolphins player (except Parker) finishes as a top 15 at their position
- September 05, 2020