Players like Patrick Mahomes, Christian McCaffrey, and Michael Thomas are every week starters and will continue to be until proven otherwise.  Other players, even some stars in the league, can't be started every week if the match up isn't in their favor.  Last season, quarterbacks were unable to be started against the Patriots defense and running backs really couldn't produce against the Buccaneers defense.  Sometimes the players you draft to be starters may have to be benched in favor of a back up or a weekly streamer.  Every team plays in week one, so which players (that aren't weekly starters) will have the best week one?

Derek Carr has a great matchup in week one.  Carr and the Raiders are going to Carolina to face the Panthers, which is possibly the best team to face in week one.  The Panthers have a new head coach, offensive coordinator, and defensive coordinator.  In such a weird and shortened offseason, the team may take a couple of weeks to get into gear.  The offense could struggle to move the ball and potentially stall out on multiple drives.  This would give the ball right back to the Raiders and allow Derek Carr to really go off.

Carr has also said he's tired of being disrespected so he feels like he has a lot to prove this season.  With new weapons like Henry Ruggs III and Bryan Edwards, and Lynn Bowden, he should improve as a passer.  The Raiders quietly had one of the better offensive lines last season which is a huge improvement from where it was in 2019.  Not to mention they still have Darren Waller, Tyrell Williams, and Josh Jacobs as pass catching options.  This is a pretty loaded offense lining up against a young and inexperienced defense.  Derek Carr could have his way with the Panthers in week one and really make people regret not playing him. 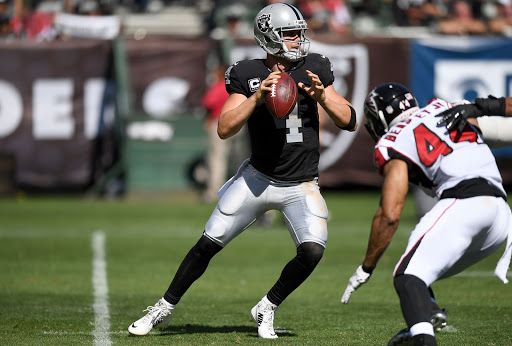 Ben Roethlisberger is another starting worthy quarterback who probably won't be in many people's lineups week one.  The injury is a little concerning, but the news coming from camp sounds positive about his throwing ability.  The Steelers have a plethora of weapons like Juju Smith-Schuster, James Washington, Diontae Johnson, Chase Claypool, and Eric Ebron to name a few.  They also still have one of the better offensive lines in the NFL.  They're matched up against the Giants who, aside from the interior of their defensive line, don't have a ton on that side of the ball.

Daniel Jones will be going against one of the best defenses in the league and may struggle as it's only his second season in the league.  The offense should be able to move the ball, but that doesn't mean this elite defense won't force turnovers.  Big Ben will get the ball in his hands for more than half of the game and will light up this lack luster secondary.  It'll be a great comeback story for him and the Pittsburg Steelers.

David Johnson disappointed many in 2019 as he struggled through injuries and eventually got replaced by Kenyan Drake.  He was traded to Houston, who was in desperate need of a running back, where he hopes to revive his career.  Bill O'Brien didn't trade away a superstar receiver for a running back he didn't plan on utilizing as much as he possibly can.  David Johnson will see a valuable amount of work in 2020, and week one could be the start of a comeback season for him.

The Texans face off against the Chiefs, who they blew a massive lead in the playoffs to.  Deshaun Watson will be looking for revenge and will need help from the run game.  Chris Jones is an amazing pass rushing defensive tackle, but is nearly a liability in the run game.  The Chiefs defense took a 180 after their bye week in 2019, but still struggled against the run come playoff time.  The defense has improved and will continue to get better, especially with the fact that they brought back so many starters, but they are built to stop a passing offense.  If David Johnson can stay healthy, Bill O'Brien will revive his career in week one of the 2020 season.

The Cleveland Browns have the best running back duo in the league with Nick Chubb and Kareem Hunt.  Chubb has earned his role as the starter on this team, but Kareem Hunt will be more involved than some people believe.  The Browns face off against the Baltimore Ravens in week one which is a negative match up at nearly every position.  The Ravens have a great secondary, even without Earl Thomas, a near elite linebacking corps, and above average defensive line.  The receivers and tight ends will be tested and probably have very limited production, but the offense has to run through somebody, which leaves the running backs.

Nick Chubb is going to be started in every league, but Kareem Hunt won't and he deserves to be.  The Browns will want Baker to pass the ball against the Ravens as they will probably be trailing at some point in this game.  Chubb isn't a bad receiving back, but Kareem Hunt is one of the best in the league.  Hunt will get the snaps when trailing and will get the targets on screens and dump offs when OBJ, Jarvis Landry, and Austin Hooper are locked down.  Kareem Hunt will be worth a start in PPR for sure, but will be less valuable in a standard scoring league. 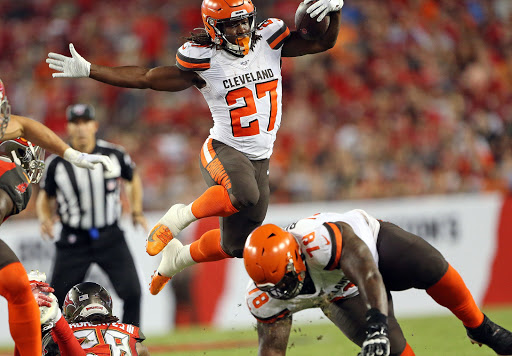 The Pittsburg Steelers have one of the best match ups to start this season against the New York Giants.  Juju Smith-Schuster will definitely be started in nearly every league already, but his counterpart in Diontae Johnson may be on some people's bench.  Johnson should be started in week one against the Giants.  The secondary is depleted with Deandre Baker gone and Sam Beal opting out for 2020, the Giants only have Julian Love, Xavier McKinney, and Jabril Peppers.  The rest of the team, and defense as a whole really isn't that great.

The strength of this defense is the interior of the defensive line and stopping the run.  The Steelers could use this to their advantage with Big Ben returning and pass the ball a lot.  Diontae Johnson has great downfield speed and showed that he was a solid route runner in just his rookie season.  If Johnson can keep creating the same separation as last season, he should have a great start to his sophomore year.  Assuming Juju takes the number one corner in James Bradberry, this leaves Diontae Johnson on what should be a third or fourth string cornerback (either Grant Haley or Corey Ballentine) and he could absolutely torch them.  Look for Diontae Johnson to have one of the best games of his young career in week one. 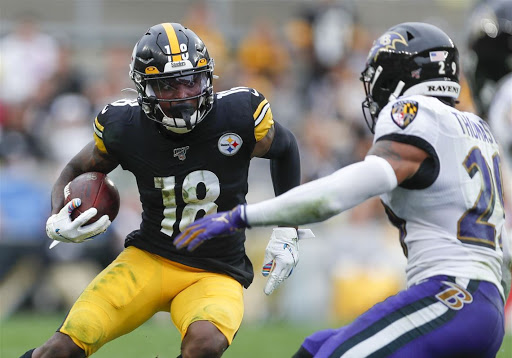 The 49ers have a solid receiving corps, when they're healthy.  With injuries to Deebo Samuel, Brandon Aiyuk, Richie James Jr., and J.J. Nelson, there aren't many options past George Kittle in the receiving game.  Although they are a run heavy team, Jimmy Garoppolo had two of his best games last season against their week one opponent, the Arizona Cardinals.  This could make Kendrick Bourne very valuable for week one.

Bourne is a great possession receiver and is utilized mainly to get first downs and in the red zone but without Samuel or Aiyuk, he could easily see more action.  Jimmy G will have to throw the ball in this game as the Cardinals will not be an easy win for them as they weren't last season.  George Kittle, who is also dealing with an injury, can't take every single target for them.  Kendrick Bourne will see targets in week one and could see enough to be worth a start.  The Cardinals secondary, although better than last season, still has some holes in it and may struggle to start the season.  Bourne will not be a WR1, but could easily be a WR2 or a good flex start for a team lacking some depth.

The Dallas Cowboys take on the Los Angeles Rams in week one, and they have one of the most loaded offenses in the league.  The Rams have an above average defense, but they are lacking at linebacker after losing Corey Littleton.  They also are a little young at safety with Taylor Rapp and John Johnson III, which could be very beneficial for Blake Jarwin.  The Rams have Jalen Ramsey to take on Amari Cooper and could throw Troy Hill or either safety on Michael Gallup and Ceedee Lamb.  With arguably the best player in football in Aaron Donald, the running game may take a little to get going as well.

The lack of a great coverage linebacker and the need for safety help on all of those talented receivers leaves a great opportunity for Blake Jarwin to step up.  Jason Witten is now in Las Vegas making Jarwin the number one tight end on the Cowboys.  Although the yards may not come as the secondary is full of good tacklers, the receptions in the second level of the defense should be enough to make him worth a start (in half or full PPR).  Experts all over the NFL are predicting Blake Jarwin to have a great season and it could very easily start in week one.  If you don't draft one of the top five or six tight ends, Blake Jarwin will be worth a stream in to start your season. 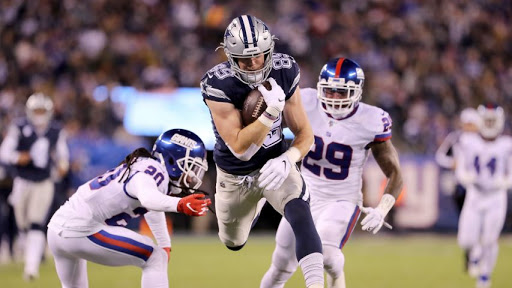 I almost never draft a defense (unless the league requires it then I do it in the last round), so I typically stream defenses week to week based on matchups.  One defense that WILL be available after a draft is the Las Vegas Raiders.  They have a solid match up against the Carolina Panthers in week one and could have an outstanding week.  The Panthers offensive line is well below average after trading Trai Turner for Russel Okung.  The Raiders have a good pass rush between two second year players in Cleilen Ferrel and Maxx Crosby.

Their defense has no real holes in it, but they are lacking stars.  The two starting linebackers (Corey Littleton and Nick Kwiatkoski) have both proven to be good in coverage, and the secondary isn't too bad either.  Though they are very young, Damon Arnette and Trayvon Mullen should both be average cornerbacks at the very least.  Demarious Randall and Johnathan Abram make up a decent safety duo as well.  The biggest weakness on this defense is on the interior of the defensive line, and even that's not too bad.  Both Maliek Collins and Johnathan Hankins can stop the run at a decent level of skill, but there isn't a ton of pass rush created between the two of them.

The Panthers have a new quarterback, coach, and offensive coordinator in the worst offseason to do try to rebuild in.  Carolina will take a couple weeks to really get up to speed and will probably have their worst week early on.  There are definitely better defenses to start (like Pittsburg or San Francisco), but those are going to be drafted.  The Raiders should make a great streaming defense a couple times throughout the season, but week one could be their best week. 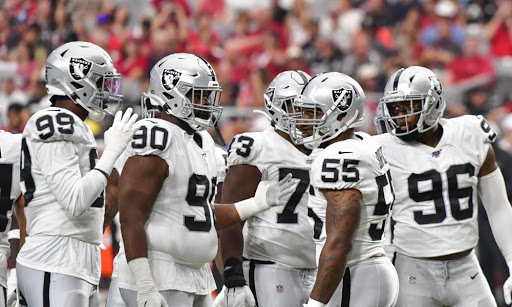